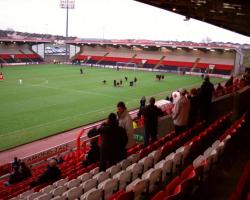 The Ladbrokes League One side beat Queen of the South 2-1 at home in the last round to set up a lucrative meeting with Brendan Rodgers' side on Sunday, with the match moved to Airdrie's Excelsior Stadium.

The vast majority of the 9,500 fans will be there to cheer on the Hoops who are unbeaten domestically this season, clear at the top of the Ladbrokes Premiership with the Betfred Cup already in the trophy cabinet.

Boyd, though, revealed the Coatbridge part-timers have already won financially.

He told Press Association Sport: "When we beat Queen of the South at home we banked ÃÂ£843.

"The Celtic game will be substantially more than that, I think it will be six figures but I am not sure exactly how much.

"It will make a significant difference

This will move the club from a battle for survival to one of financial stability for a while, but only if we use the money wisely

"The players will benefit from the game, we will reward them for beating Queen of the South and there will be a reward for getting a result on the day."

Boyd revealed how everyone at Rovers has been busy since overcoming Ladbrokes Championship side Queens.

He said: "When we beat Queen of the South the Celtic game was seven weeks away and it seemed very unreal for a while.

"We have had to do all the organisation ourselves and most of us are volunteers.

"They were very nice at Celtic, they asked what I did at Albion Rovers - I said I was the chairman and they didn't believe me at first, they couldn't imagine their chairman humping boxes of tickets in.

"But everybody has worked really hard behind the scenes, getting the mascots ready, hospitality - one hundred and one other tasks that we don't have to deal with usually.

"It has been a challenge, but it is one we have risen to and I am looking forward to three o'clock on Sunday when we can all look forward to the game."