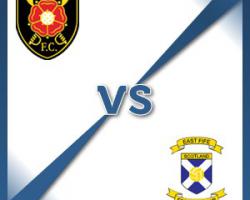 Albion V East Fife - view commentary, squad, and statistics of the game live.Young sidelined for RoversAlbion Rovers' player/ manager Darren Young has ruled himself out against East Fife as he is not yet ready to return after groin surgery.Kyle Turnbull remains out with an ankle problem with Young keen to win this game as promotion rivals Arbroath and Queen's Park are facing each other.Young said: "This would be a massive game to get the three points from as we will either have pulled closer to Arbroath or further away from Queen's Park or indeed done both."East Fife secured a point against Queen's last week with a very solid display and I am sure that they will be looking to build on that."East Fife head to Coatbridge with player/ manager Gary Naysmith hoping to add Jonathan Page to his side for a second time this season after offering the Dunfermline defender a permanent deal

Ross Campbell is suspended and Scott Smith (ankle) is out.Naysmith said: "We showed last weekend against Queen's Park that we can be a very good side defensively

We limited them to very little and we will need the same approach again at Albion Rovers."If we can be as strong defensively again but add more threat up front we can bring something back from this game."