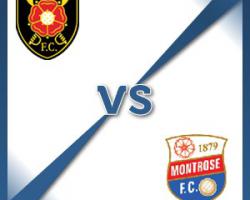 Albion V Montrose - view commentary, squad, and statistics of the game live.Young sidelined for AlbionAlbion Rovers will be without player/ manager Darren Young against visitors Montrose with Kyle Turnbull looking set to be ruled out with an ankle injury.The Coatbridge side won 1-0 at Clyde last weekend however Young wants to see an improvement from his players against the Gable Endies.He explained: "I was pleased with the win and with the clean sheet however we need to be a more ruthless side."We had plenty of chances however we never killed the game off and I want to see that side of our game improve against Montrose."They ran Queen's Park close last weekend so they must be a decent side."The Gable Endies are without the suspended Garry Wood and with Craig Bell out with a knee injury former Livingston and Arbroath defender Michael Travis is set for his second game as a trialist.Like his opposite number Montrose manager George Shields is looking for his men to convert chances.He said: "We were well on top of Queen's Park last weekend at the start of the game but could not score

They broke away and took their chance and that changed the game."Overall it was our best performance in a few weeks and hopefully we can build on that by playing well and scoring at Albion Rovers."