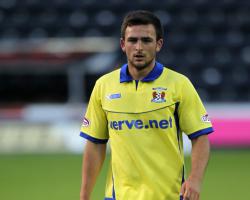 The 24-year-old has fond memories of his only appearance against the Hoops which took place on May 8, 2011.

Fisher came on as a late substitute at Rugby Park in only his second game for Kilmarnock and although he tackled "everybody" he could not help the Ayrshire club claw back the 2-0 deficit.

He has had to wait almost six years for another chance to sink the team he supports and is relishing the prospect of the William Hill Scottish Cup fourth-round clash at Airdrie's ground.

Fisher told Press Association Sport: "I came on for the last 15 minutes against Celtic and I still remember every minute of it to be honest and I am looking forward to the same feeling I had then.

"I was 18 and had just made my debut a week before at St Johnstone and I was dying to get more.

"We were 2-0 down at the time to Celtic at Rugby Park and the gaffer Kenny Shiels gave me a shout to go on and I thought 'brilliant'.

"I just remember tackling everybody

It was so frantic and there was so much noise

"It was a good feeling to play on such a big occasion and that's what you look for in football and it is coming back around again on Sunday.

It is the biggest draw we could have got."

Fisher signed for Rovers from East Fife in 2014 and combines his job as a personal trainer with part-time football.

However, he still harbours hopes of returning full-time and believes Sunday's live televised game offers him and his League One team-mates the chance to attract suitors.

He said: "I do want to be back full-time and I feel that I am good enough.

"It is a showcase to go and do what you can and that is what I am looking forward to the most, to go out and try to do my best and do something eye-catching and also try to get the result along the way."

Celtic are unbeaten domestically this season and overwhelming favourites to get through to the next round, but Fisher is adopting a bullish attitude.

He said: "You don't go into any game thinking you are not getting anything out of it.

"They are due a beating aren't they? There needs to be an upset somewhere along the line and why not be us?

"It would be a way for the team to get into the limelight."